In February 1963, God brought me into this world in the village and province of Manjanja, Chipata in eastern Zambia. I was the third child born among seven, six of those being boys. My father drank heavily and smoked continuously. With my father’s bad influence, and not knowing any better, I started drinking and smoking early in my life. Though my mother had become a strong believer, my father refused to allow any of us children to go to church. Only when he left the house did we ever go to church. This difficult upbringing continued until my father became ill with tuberculosis. He became a believer then, but soon after he died. A few years later, my mother, eldest brother and sister also died. I was forced to become the head of my family at a very young age. Even with that responsibility my life in high school was characterized by selfishness, stealing, lying, and immorality. My behavior became increasingly worse as I grew older. Even after meeting my future wife, Beatrice, and getting married, I had very few convictions about what was morally right. Many people tried to share the Gospel with me. Some I ignored and some I simply chased away.

When I was 29, our third-born boy, Ndabaningi, became mysteriously ill with a disease that lasted for almost two years. We took him to the hospital several times, but nothing changed for the better. On September 16, 1991, our pastor and some church members visited our home to pray for our son and family. My heart softened enough to allow them to pray for us. As they prayed, for the first time I realized how far I had strayed from God—how I had rejected Him and closed myself off from Him, both in my heart, and in the way I lived. At that moment I sensed God’s voice telling me that He loved me, and that He wanted me to confess my sins to Him. Right there, in repentance and tears, I asked God to forgive me, and I dedicated my life to Him. By the next morning our son had gotten better, and eventually he was completely healed. After that experience, everyone in my family put their faith in God.

Now Beatrice and I have a rather large family. Along with our four biological children—one girl and three boys—our family includes one orphaned boy, and my brother who has Downs Syndrome, plus two grandchildren. All of us do ministry together.

At first God called us to witness in Zambia’s capital, Lusaka. I began to mobilize men to start an interdenominational men’s ministry. It eventually became a national and regional ministry. In 2009, I left my paying job as an Administrative Officer with the government to answer God’s call to full-time ministry. Many people called this change foolish because I would have no financial support. But reflecting back, I can see how God prepared me for this step. Beatrice and I have served in many ministries over the years for men and women, equipping them in disciple-making and evangelism. She reminds me often of the women disciples who accompanied Jesus wherever He went. Together we pray for each other and encourage each other as we do ministry.

In September 2015, one of Reach Out Youth Solutions’ trainers, Obadiah Ogosi, came from Kenya and introduced me to Jesus-Focused Youth Ministry (JFYM). I became one of Zambia’s first Eagle Leaders—a trainer of trainers.  Since then, I have used this strategy, and the tools that go with it, to equip pastors and youth leaders. They not only implement this training in their churches, but they also reproduce other disciple-makers in other churches. It seems that this ministry was specifically designed for me and for my vision to multiply disciples all over Zambia for God’s glory! 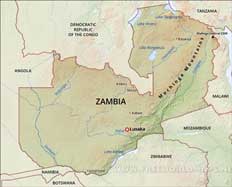